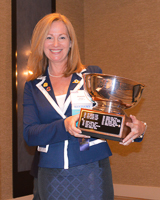 Rep. Kim Moser is known as and calls herself a “friend of medicine.” However, one could say that she and medicine are more than just friends. They’re family.

The Taylor Mill, Kentucky native comes from a long line of healthcare workers. This includes her family practice physician father and nurse mother, internist father-in-law and nurse mother-in-law, and her pulmonologist husband and Kentucky Medical Association (KMA) 8th District trustee, Neal Moser, M.D. Moser herself is a registered nurse who spent much of her career in the neo-natal intensive care unit and as part of the University of Kentucky’s flight care team.

Her passion for civic and political involvement began in childhood, and between being a mom to five boys and organizing her family’s sometimes chaotic household, Moser found time to invest in the Northern Kentucky Medical Society Alliance, beginning during her husband’s time in medical school.

“I call it ‘our’ first year of medical school, because we went through it together,” she says.

Moser saw the Alliance as more than just a support network. She began getting involved in legislative issues of importance to the organization, which eventually led to her chairing the legislative committee for the KMA Alliance and Kentucky Physicians Political Action Committee (KPPAC). She was the first non-physician chair of a medical association PAC in the country.

In 2015, Moser was awarded AMA’s prestigious Belle Chenault Award for Political Participation. The award is given every two years to the AMPAC/AMA Alliance member who has made significant personal contributions of time and talent in assisting friends of medicine in their quest for elected office at the state and federal level. Moser received the award for her work and leadership as KPPAC chair and for playing a key role in the re-election campaign of Diane St. Onge, a longtime friend to Kentucky physicians. Moser was able to increase KPPAC contributions by 16% in her first year as chair alone and served as a strategic planner and consultant to Rep. St. Onge’s campaign. She personally hosted fundraisers, organized volunteers and assisted with campaign materials and social media.

Moser as a State Representative
Juggling such roles and raising a large family would keep anyone busy enough, but in 2016 Moser couldn’t refuse when the state representative from her 64th District decided to retire and personally asked her if she would be willing to run for the seat. “Timing is never perfect, but the stars kind of aligned,” she said. “My kids were getting older, going off to college, and everyone was off doing what they were supposed to be doing. So I decided to run.”

Moser won the election, ironically beating two trial attorneys. She immediately got to work in her first session, sponsoring and supporting legislation that would benefit physicians such as medical review panels, along with workforce and economic development. She also co-sponsored Senate Bill 89 with Sen. Ralph Alvarado, M.D., which requires insurance companies to cover smoking cessation programs and was a priority issue for KMA during the 2017 session.

What may be her signature piece of legislation thus far came with the passage of House Bill 333, which she also sponsored. She currently serves as the Director of Drug Control Policy for her three-county Northern Kentucky area and as the Legislative Liaison for the Heroin Impact Task Force. She saw first-hand the devastation caused by the state’s opioid and addiction epidemic. HB 333 primarily made it a felony in Kentucky to illegally sell or distribute fentanyl, carfentanil and related drugs. It also directed each state licensing board, including the Kentucky Board of Medical Licensure (KBML), to draft regulations that limit prescriptions for Schedule II controlled substances to three days when used to treat acute pain.

The bill was a priority issue for Gov. Matt Bevin, who testified before a legislative committee supporting it. Moser worked hard to make sure the bill was workable for physicians by including a series of exceptions.

Moser is adamant, however, that tackling the addiction issue is going to take a multifaceted approach and she works daily to identify gaps and barriers in the system that can be streamlined.

“We have to look at the big picture,” she said “There’s not just one initiative or one piece of legislation that will solve it. We need to expand treatment access and wraparound services and support networks like job training and parenting classes.”

Moser also makes it a priority to work towards eliminating barriers in the practice of medicine. “With my background, all health care issues are important to me,” she said “And there are so many burdensome regulations that have a stranglehold on medicine. That’s my primary focus moving forward, because in the end we’re all patients and we all want quality care.”

The Alliance has made addressing the stigma associated with drug addiction one of its national initiatives. “We have developed educational materials that can be co-branded and used in projects that discuss addiction as a brain disease,” she says “That stigma hampers an individual’s desire and ability to get treatment. The AMA Alliance is partnering on best practices for addressing this issue with the AMA.”

The AMA Alliance is also addressing physician burnout and physician suicide, which Moser says is a big problem. The Alliance developed a mental health self-assessment tool that physicians or their spouses can use to identify their risk. “Looking at the underlying cause of physician burnout is important when addressing this legislatively,” Moser said. “We can start to eliminate some unnecessary burdens placed on physicians.”

Moser says the Alliance is constantly working to engage members across the nation and highlight those important issues through policy and community engagement. “We have passionate members who can really mobilize efforts around an issue,” she said.

“We are the family of medicine. Alliance members understand more than most, the lifelong commitment to caring for others. We are actively engaged and passionate about causes to improve life in our communities. The Alliance is a group of people who really understand the challenges surrounding the personal, clinical and administrative sides of healthcare.”