2018 KMA Legislative Summary: Out of the Chaos, KMA Found Success 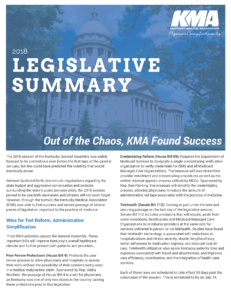 The 2018 session of the Kentucky General Assembly was widely forecast to be contentious even before the first taps of the gavel in January, but few could have predicted the volatility that would eventually ensue.

Between back-and-forth, last-minute negotiations regarding the state budget and aggressive conversation and protests surrounding the state’s public pension crisis, the 2018 session proved to be one both lawmakers and citizens will not soon forget. However, through the turmoil, the Kentucky Medical Association (KMA) was able to find success and secure passage of several pieces of legislation important to the practice of medicine.

Peer Review Protections (House Bill 4): Protects the peer review process to allow physicians and hospitals to assess their work without the possibility of their opinions being used in a medical malpractice claim. Sponsored by Rep. Addia Wuchner, the passage of House Bill 4 is a win for physicians, as Kentucky was one of only two states in the country lacking these protections prior to this legislation.

Credentialing Reform (House Bill 69): Requires the Department of Medicaid Services to designate a single credentialing verification organization to verify credentials for DMS and all Medicaid Managed Care Organizations. The measure will also streamline provider enrollment and credentialing procedures as well as the written internal appeals process utilized by MCOs. Sponsored by Rep. Ken Fleming, this measure will simplify the credentialing process, allowing physicians to reduce the amount of administrative red tape associated with the practice of medicine.

Telehealth (Senate Bill 112): Coming in just under the wire and securing passage on the last day of the legislative session, Senate Bill 112 includes provisions that will require, aside from some exceptions, health plans and Medicaid Managed Care Organizations to reimburse providers at the same rate for services delivered in-person or via telehealth. Studies have found that telehealth technology is associated with reductions in hospitalizations and illness severity, shorter lengths-of-stay, better adherence to medication regimes, and reduced cost-of-care.  Telehealth utilization also saves Kentucky patients time and expenses associated with travel and absenteeism, and improves care efficiency, coordination, and the integration of health care services.

Each of these laws are scheduled to take effect 90 days past the conclusion of the session. This is scheduled to be on July 14.

KMA spent much of the 2018 session working to oppose several bills that posed threats to the public and the practice of medicine, including issues related to scope of practice, midwifery and mandated continuing medical education. The Association proved to be successful in those efforts. KMA also was able to bypass an effort to establish a physician provider tax as legislators searched for additional revenue in the final days of the session. However, KMA members cannot ‘rest on their laurels’ as these issues are expected to make a return during the interim and next year’s session.

What’s Ahead: Staying Engaged in the Interim

Although the books are officially closed on the 2018 session, the work of the KMA is far from over. In many respects, advocacy efforts are of even greater importance in the interim session.

Engaging with legislators while they are home in their communities is crucial to ensuring that our priorities are front-of-mind for the 2019 session. It is imperative for members to take advantage of this time and continuously seek opportunities to connect with and educate state legislators. Establishing relationships with legislators can foster meaningful conversation and understanding of the issues of concern to physicians.

Members are also strongly encouraged to become involved in the Association’s AIM for Better Care initiative. AIM is a long-term project that will seek to tackle administrative burdens, laws and regulations that are ultimately detrimental to the health of Kentuckians. Physicians are asked to submit feedback and identify issues that negatively impact the delivery of care surrounding smoking, drug abuse, obesity, diabetes and flu/pneumonia. Input can be sent at any time via email to administrativeburden@kyma.org. KMA plans to address these barriers through advocating for legislation or policy changes, public awareness and education.

KMA would like to thank its membership for contributing to yet another successful legislative session. Many members traveled to Frankfort to testify before committees on behalf of the physician community, and countless more sent messages of support through the General Assembly’s Legislative Message Line or through direct contact with their senators and representatives. These efforts certainly advanced the priorities of physicians and patients across the Commonwealth.