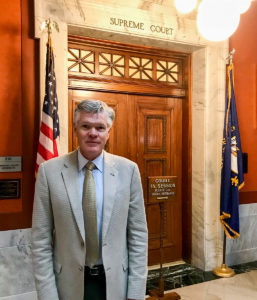 I traveled to Frankfort on Wednesday and attended the Kentucky Supreme Court hearing on the constitutionality of Kentucky’s medical review panel law.  I had only been in the Supreme Court Chamber once before, which is in the State Capitol Building, one floor below the House of Representatives.  I went there this time because the Court heard oral arguments from both sides on the issues in the case and I wanted to hear what they had to say.

I had been told that few people attend these hearings. But on this day, concerning this issue, the gallery was full.  That’s how important this law is to Kentucky.  Without it, we would remain one of the few states with no tort reform.

The hearing itself was very formal.  A clerk announced the start of the proceedings as the seven Justices – five men and two women – entered the courtroom.  The medical review panel case was the only issue to be heard that day.  Each side received a specific amount of time to make their case to the court.  I expected to hear a somewhat technical legal argument, with perhaps a few questions from the Justices to clarify some issue of law.  That’s not what happened.

For nearly an hour, I heard what could only be described as a legal “free for all.”  The attorney representing the state barely got one sentence out of his mouth before a barrage of questions from the various Justices began.  The issues they asked about jumped from one to the other, with no real chance for a legal case to be made.  It was a question-and-answer session.  The lawyer representing the other side got a little more opportunity to get his argument out, but he too faced a string of questions.

What was also surprising to me were the repeated questions asked about the practical application of the law, rather than the constitutionality of the law.  There were questions about whether the law is needed – whether it delayed a case from getting to court – and whether it would truly address the issue of malpractice insurance costs and the need for more physicians in our state.

As a physician, it is easy to argue for the virtues of the law.  My son lives in Kentucky, but practices in Indiana in part because Indiana has tort reform, including medical review panels.  The panels could shorten the process for all involved by cutting to the merits of whether an action is negligent.  Perhaps experts making such a decision – one way or the other – would push for a quicker settlement.  With all of this in mind, I had visions of raising my hand to the court and asking, “Can I say something?”  But, of course, I didn’t.

I was surprised that the issue of whether this is a “good law” was debated so much. I may have trouble arguing the finer points of law or the constitution.  But to me, there seems no doubt that the law is necessary and will be a huge benefit to Kentucky.

David Bensema, MD, is a member of the Kentucky Medical Association Board of Trustees and a Past-President of the KMA.  The case of Commonwealth of Kentucky v. Claycomb concerns the constitutionality of Kentucky’s new medical review panel law.  A decision from the Kentucky Supreme Court in this case should be handed down in the coming months.