You Are Here: Home > Advocacy

The Kentucky Medical Association is the only association in Kentucky that represents all physicians and patients before the Kentucky General Assembly, the courts, governmental regulatory agencies, the media and Congress. The KMA works to protect the practice of medicine in Kentucky and to assure that patients have the access to the care they deserve.

MYTH: Insurers may select which tobacco cessation medications to cover.

MYTH: Medicaid, Medicaid MCOs and commercial payers may still require pre-authorizations on all FDA tobacco cessation medications.
FACT: The implementation of the new law prohibits utilization management (pre-authorizations) except in certain instances. For example, if the treatment exceeds recommended duration based on current USPSTF guidelines or if more than two quit attempts are required , then utilization management requirements may be imposed. 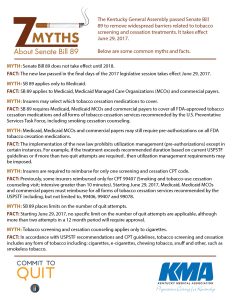 MYTH: Insurers are required to reimburse for only one screening and cessation CPT code.
FACT: Previously, some insurers reimbursed only for CPT 99407 (Smoking and tobacco-use cessation counseling visit; intensive greater than 10 minutes). Starting June 29, 2017, Medicaid, Medicaid MCOs and commercial payers must reimburse for all forms of tobacco cessation services recommended by the USPSTF including, but not limited to, 99406, 99407 and 99078.