Another Notch in the Win Column for Kentucky Physicians and Patients 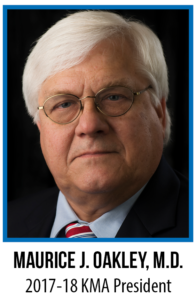 As most of you are probably aware, last month Anthem agreed to fully rescind its Modifier 25 policy that would have reduced payments for E&M services reported with CPT Modifier 25. Had this policy been put into action, it would have severely burdened our patients and undermined our positions as physicians.

Anthem’s official statement, released on Feb. 26, credited the American Medical Association, national medical specialty societies, state medical associations and individual providers with taking the lead on discussions that ultimately led to their decision. Anthem also expressed its commitment to continuing to work with these organizations to address physician concerns with other policies and guidelines and that “the company believes making a meaningful impact on rising health care costs requires a different dialogue and engagement between payers and providers.”

What a win for physicians, organized medicine and health care in general!

For years, insurance companies have had far too much input in the care of patients. They frequently get in the way of physicians practicing medicine. The Modifier 25 policy was just one example of the overreach that many of these companies exhibit. Like many of you, I was optimistic that action may be taken following the public reception to KMA’s Jan. 5 op-ed in the Lexington Herald Leader, in addition to the pressure applied by many KMA members and other organizations. However, to have the company publicly acknowledge the efforts of our physicians is especially encouraging as we embark on our AIM initiative, designed to lessen administrative burdens that will ultimately improve the health of Kentuckians.

The Modifier 25 policy is but one example of the type of results we hope to achieve with the AIM project. Through a focus on five specific health issues, KMA plans to address barriers to care through a combination of advocacy, public awareness and education.

The Association has begun the process of researching the issues physicians face when caring for patients who use tobacco, are obese, suffer from diabetes, abuse drugs and seek prevention or treatment for the flu and pneumonia. These are all areas where Kentucky suffers in greater numbers than in other parts of the country.

Check out our AIM initiative and let us know if you would like to be part of our efforts. We have set up an email address, administrativeburden@kyma.org, which will be used to gather feedback on these issues. It is my hope that the Anthem Modifier 25 policy is another one of many notches in the “win” column for Kentucky physicians and patients.