5 Questions With Dave Adkisson, President and CEO of the Kentucky Chamber of Commerce 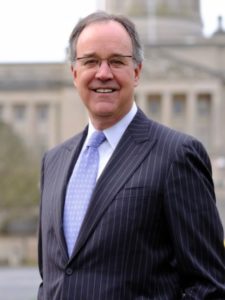 Dave Adkisson serves as President and CEO of the Kentucky Chamber of Commerce, which represents more than 3,800 businesses across the state, employing over half of the state’s workforce. The Chamber works to advocate and unite businesses and last year was named “State Chamber of the Year” by the Council of State Chambers. Last week, Mr. Adkisson sat down with KMA to talk about his background, the organization’s priorities, and why physicians should consider getting involved.

I returned to my hometown of Owensboro after college, hoping to get involved in the community.  There was an opening at the Chamber of Commerce and the president hired me as his assistant. I later became the Chamber president for three years, left the Chamber to serve eight years as mayor of Owensboro and then returned for another four years at the helm of the Chamber.  Later, the Birmingham, Alabama Chamber invited me to be the president of that metropolitan chamber. After five wonderful years in that position, my home state invited me back as president of the Kentucky Chamber.

Our priorities have centered on making Kentucky a more attractive place for businesses to locate and expand, creating well-paying jobs.  We have focused on getting Frankfort’s “house in order” through pension and tax reform (two huge issues which as of this publication have not been resolved), reforming the workers compensation system which taxes every employer in Kentucky, working with KMA to improve the legal climate in Kentucky (allowing peer review, working to cap jury awards, etc.), working to improve health through a $1 per pack cigarette tax and working to protect public education investments against the fall-out from the pension crisis.

For medical professionals, the legal climate in Kentucky is not healthy.  We made some progress in this legislature by getting peer review into law, but we have a lot of work to do to contain run-away juries and the rising cost of medical malpractice suits.

Physicians are certainly encouraged to become members of the Chamber and to be involved in our efforts to improve the business climate and the health of Kentucky.  We know that professionals have time limitations but the Kentucky Chamber is not a civic club where attendance is required.  We are a public affairs agency working on behalf of employers of all sizes to advance Kentucky.

Businesses in Kentucky have become increasingly concerned about the poor health of Kentuckians, specifically their employees and job applicants.  An unhealthy population costs businesses in lost productivity, in soaring health insurance premiums and in taxes (Medicaid costs, public health costs, etc.).  Issues such as smoking, the opioid crisis, obesity, and worksite wellness programs have become central issues to businesses in the last decade.  The Chamber is a natural ally for medical professionals in pursuing these goals.