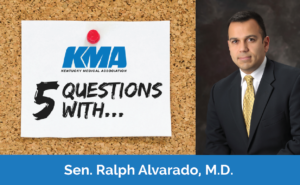 With the 2018 Kentucky General Assembly off and running, KMA spoke to Sen. Ralph Alvarado, a physician and advocate for the medical community, about the session and his thoughts on several KMA priority bills.

As I began my career in private practice, I began to appreciate how much defensive medicine impacted the treatment of my patients.  Medical tort reform began to gain steam in Kentucky and I reached out to my legislators to support the measure.  When one of them abstained from the vote, I realized that I was not being represented.  Clearly, there was a need in organized medicine for more physician voices.  I began to explore the possibility of running for office and began a journey that I never expected.

Answering this question is like trying to answer ‘Who is your favorite child?’  I have been fortunate to guide many legislative accomplishments in my first term:  Medicaid MCO appeals process, KBML appointments, Medical Fair Contracting, MOC/MOL legislation, Direct Primary Care Legislation, Domestic Violence Reporting Legislation, Colon cancer prevention, and others.  But perhaps the most beneficial is the passage of Medical Review Panels.  While it is actively challenged by the Trial Lawyer lobby, it addresses Kentucky’s poor liability climate and hopefully will attract more physicians to the state.   I am also hoping that it will encourage more of our providers to utilize an academic approach to medicine, knowing they will have a panel of experts in the same field to examine a provider’s judgment.  Any reforms to our civil liability code will have a huge impact for safety and cost.

Again, I believe our communities underestimate how much time and money are spent on defensive medicine. Defensive medicine has essentially become the norm in our emergency departments and primary care. When I was in residency at the University of Kentucky, we were trained to rely on our judgment and examination skills and truly question whether subjecting a patient to a specific test would assist in the physician’s diagnosis or treatment.  Today, because of our out-of-control liability climate, physicians order countless tests and often unnecessarily admit patients to the hospital because they run the risk of having to one day explain that choice to a trial attorney in the court of law.  Physicians know that defensive medicine is bad for patients.

But, SB2 has implications beyond medicine, too. Senate Bill 2 asks Kentuckians to approve a constitutional amendment allowing the General Assembly to establish reasonable thresholds for jury awards—a common practice across the country, and particularly in our surrounding states.   It is global liability reform and will provide stability for legal liability across Kentucky. It takes the power from the hands of lawyers and judges back to the people of the state.

The tobacco debate is always interesting, because what I’ve learned is that it’s not just a partisan debate. It’s a rural versus urban fight. But tobacco use in Kentucky has a fiscal impact for the state. We have a workforce with a higher medical acuity, which drives up our healthcare costs.  This, in turn, effects our ability to attract new businesses. This would provide needed revenue to our state, upwards of $260 million. The most difficult aspect of getting this policy passed is that we have several legislators who are averse to raising any taxes at all; and generally, I’m one of them. We also have some rural legislators who have constituents who raise tobacco and are opposed to any taxes that may impede the growth of this crop. Most importantly, this bill is good public health policy as it has been proven to reduce youth smoking rates everywhere it has been implemented.   I suspect it will be very difficult to pass a tobacco tax as an individual measure, but will stand a better chance if part of a larger global tax reform.

Our reputation in Frankfort is that physicians complain too much.  Legislators notice that we complain about policy after the fact, but we’re never really present during the formulation of policy to provide opinion or testimony. We are reactive and not proactive.    Then, when politicians don’t follow our recommendations, we become frustrated and tune out from the process. I do know that legislators do want to listen to us and value our opinions.  We must be more proactive with our testimony.