The American Medical Association (AMA) and Kentucky Medical Association (KMA) are calling on state lawmakers to quickly pass House Bill 389, which would remove health insurance company barriers to evidence-based medication assisted treatment for opioid use disorder. In the 12-month period from June 2018 to June 2019, nearly 1,000 Kentuckians died from an opioid-related cause—with nearly 75 percent of deaths involving illicitly manufactured fentanyl or fentanyl analogs, according to the Centers for Disease Control and Prevention.  HB 389 was introduced last week by Kentucky Rep. Kimberly Poore Moser, chair of the House Health and Human Services Committee.

“It’s unconscionable that a health insurance company can tell a patient that he or she can’t have life-saving medication that is proved to reduce cravings, sustain recovery and save lives for people with an opioid use disorder,” said AMA President Patrice A. Harris, MD, MA. “The epidemic is changing, and Kentucky’s patients need easier access to care.”

“Kentucky physicians have taken significant actions to reduce opioid prescribing and co-prescribe naloxone to patients at risk of overdose and will continue to advocate for policies that assist patients pursuing recovery from substance use disorder,” said KMA President R. Brent Wright, MD. “This legislation will remove a critical barrier to ending Kentucky’s ongoing overdose and death epidemic. We support this bill because it will save lives.”

“Kentucky has seen too much death and despair from this epidemic,” said Rep. Moser. “We have a proven treatment and an opportunity to get help to the people who need it, when they are ready for it. This will turn the tables and support evidence-based care for our loved ones, changing outcomes for families throughout our Commonwealth.”

Drs. Harris and Wright noted that a similar measure introduced last year  passed the Kentucky House of Representatives unanimously but ultimately was defeated by opposition from health insurance companies. Kentucky already has expanded access to naloxone and reduced the number of opioid prescriptions by more than 30 percent between 2013-2018. 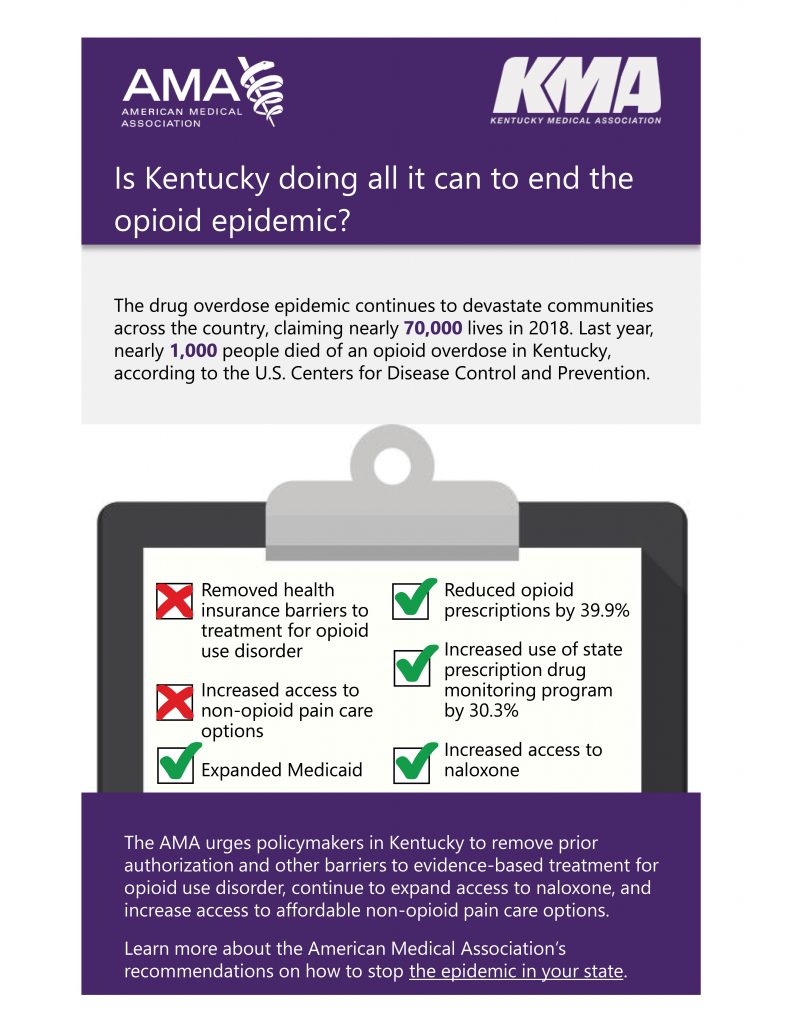