Two weeks ago, I was honored to join more than 100 physicians and medical students for KMA’s Physicians’ Day at the Capitol. This annual event brings together doctors from every specialty and every corner of the Commonwealth to advocate for the issues that matter most to our practices and patients. As someone who spends a lot of time in Frankfort during the legislative session, it is a special thing to witness the halls of the Capitol Annex fill with white coats there to impact positive change. 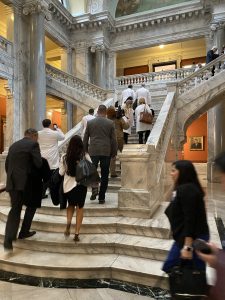 However, the highlight of this year’s Physicians’ Day was an event I wish did not have to happen. Sen. Ralph Alvarado, M.D. filed Senate Resolution 11, which honored the contributions and legacy of our late KMA President-Elect, Robert Couch, M.D., and it was presented on the Senate floor during Physicians’ Day. Dr. Couch was a tireless advocate and spent more time in Frankfort and Washington, D.C. on behalf of his colleagues and patients than most anyone I know. While donning Dr. Couch’s white coat, Sen. Alvarado recognized Dr. Couch’s wife and daughters as well as the dozens of physicians who watched from the Senate gallery as one of their own received the honorable recognition for his life of service. For those who would like to share in this moment, video from the proceedings is available here and the recognition of Dr. Couch begins at 21:25.

Following the reading of the memorial resolution, the Senate moved on to the regular business orders of the day. The majority of physician attendees had to leave following Dr. Couch’s recognition, as the KMA Board of Trustees were meeting, but it struck me that each of the bills being discussed and voted on that day were all healthcare bills. Not all of them directly impacted physicians, but each would in some way touch the lives of our patients and the delivery of care. Healthcare is always a big topic in the legislature, but sometimes it is easy to forget what is at stake when a new issue is being debated almost every single day.

Physicians’ Day at the Capitol is important, but staying engaged every other day is what truly makes the difference. While the events of February 6th brought renewed energy to our cause, we cannot rest on our laurels. I implore you to keep calling your legislators. Keep reading the KMA’s Legislative Alerts. Keep following what is taking place in Frankfort every day, because the decisions made during this time will affect your practice, patients, and the health of the Commonwealth for years to come.

During his remarks from the Senate floor, Sen. Alvarado praised Dr. Couch’s profound contributions to the field of medicine, and most notably, his passion for advocacy. “It’s often difficult to engage physicians on healthcare policy. Most are busy with their practices and daily lives. Rarely, do we find a physician who ‘gets it.’ Someone who can see the clinical side and the policy side and is willing to donate their time to address issues facing Kentucky. Dr. Couch was one of those rare doctors who ‘got it.’”

Dr. Couch was profoundly missed at this year’s Physicians’ Day, and I am so glad we received the opportunity to witness the Senate honoring his memory. I believe one of the best ways we can honor a leader is to continue to advocate for the legacy they represent and that would be through advocating for the practice of medicine, the health of our patients, and the safety of our citizens.  Keep going we will, keep going we must.