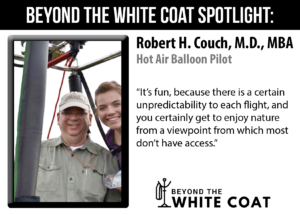 How long have you been piloting hot air balloons?
I began flight training in airplanes during medical school in Birmingham, Alabama, and finished my training and licensure in Louisville. While flying around the area, I noticed the hot air balloons that were in the skies in the early morning and late afternoon hours. I visited some of the local hot air balloon races, talked to pilots, and became interested in adding a Lighter-Than-Air rating to my pilot’s license. Unlike airplanes, you can’t go and rent a balloon to fly, so I bought my first hot air balloon and began flight training with Chuck Ehrler, a former US National Champion pilot.  With my wife Wilma serving as crew chief, we made many flights.  Balloons have a finite life, and our second balloon was designed and built in Battle Creek, MI, in 2011.

How did you get interested in this hobby?
Flying airplanes around the Louisville area made me keenly aware of the number of balloons that fly locally. Before the east end’s rapid growth, pilots would gather and fly out of the UofL Shelby campus, just across the street from KMA headquarters, on a regular basis. Development has pushed launch fields further into the countryside, but it is still a common sight to see balloons over Louisville.

Why do you enjoy it?
Flying a hot air balloon is very different from flying an airplane. It requires expertise in micrometeorology, knowing what is going on with the weather within just a few miles of where you are flying. Hot air balloons are controlled by varying the heat in the envelope, the fabric portion of the balloon, and changing altitude, which can allow for some steerage of the balloon by finding winds at slightly different directions.

How does it help relieve your stress?
I don’t know that it’s really a stress reliever, because it creates its own kind of stress! Advances like GPS and communication equipment makes it much easier on your chase crew. It’s fun, because there is a certain unpredictability to each flight, and you certainly get to enjoy nature from a viewpoint from which most don’t have access. Flying over treetops, looking down at wildlife not bothered by a large fabric bag floating overhead, gives one a different perspective. Sailing along at altitude, with the quiet pilot light burner putting out a low hiss, punctuated by blasts of 15 foot long flame producing millions of BTUs, is unlike any other type of flying.

Anything else you’d like to add?
Our balloon is named Zwaso, Haitian Creole for Little Bird. I’ve made the pilgrimage to Albequerque, NM, home of the largest balloon festival in the world. Ballooning is a great family sport!