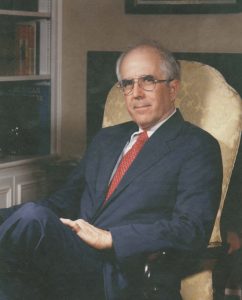 When Eugene (Gene) H. Conner, MD, 94, died in January, Kentucky lost a medical history and pulmonary physiology champion. He was KMA historian from 1964 to 2008, and simultaneously unofficial GLMS historian. He edited a fine history of the KMA on its 150th anniversary in 1992. He wrote 46 biographies of past KMA Presidents for each annual meeting over that period, and over 200 other physician biographies. As Kentucky’s premier medical historian of the late 20th century, he was active in the American Association for the History of Medicine, the American Osler Society (President, 1993), and Louisville’s Medical History (Innominate) Society, (President, 1964 and 1973).

He was born in 1921 in Baltimore as an identical twin. He graduated from the University of Maryland School of Medicine in 1945, and then married Mary Louise Brown Kieffer, the love of his life. He served in the U.S. Army Air Force Medical Corps during World War II. He joined the University of Pennsylvania and Philadelphia General Hospital faculty from 1949 to 1957, where an excellent pulmonary physiology center arose. Dr. Conner became both contributor to pulmonary basic science and a superb practitioner of its application in anesthesia.

In 1957, he was recruited as University of Louisville Chairman of Anesthesiology, where he became an inspiring figure for colleagues and medical students in clinical pulmonary physiology. Among his contributions was a protocol for treating tetanus with succinylcholine, tracheotomy and debridement, and he pioneered applications of then-new positive pressure ventilators. His anesthetic recovery room became an intensive care unit before the concept was named. Twice named Outstanding Annual Clinical Instructor, an element of his magnetism was presentation of medical history anecdotes along with cutting-edge physiology. In the early 1970s, he left UofL to establish an excellent anesthesia service at Methodist Evangelical Hospital, serving there until his retirement. Also, he was a key supporter of the Kornhauser Medical Library, compiling valuable historic records, including those of the State Board of Health that were about to be destroyed in its move from Louisville to Frankfort. These included 1930s WPA papers on Kentucky Medical History, a priceless collection.

He was preceded in death by his beloved wife, Mary Lou, and is survived by his children, Janice Ryan, Jeffrey Conner, Marcia Kirby and Melissa Baker. He was a renaissance man with wide interests, including duck hunting, photography, woodworking and stimulating medical history enthusiasm among a wide group of admiring colleagues.