KMA, KFMC and Foundation for a Healthy Kentucky Announce Partnership to Provide Signage to Tobacco-Free Schools 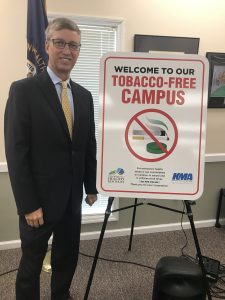 This morning, KMA, KFMC and the Foundation for a Healthy Kentucky announced a partnership that will provide campus signage to school districts across the state who agree to comply with the recently passed tobacco-free schools law.

KMA President Bruce Scott, M.D., said, “Smoking remains the leading cause of preventable death and disability in the United States and it is estimated that today there are 119,000 kids under the age of 18 in Kentucky who will ultimately die prematurely from smoking. Given that nearly ninety percent of adult smokers began using before the age of 18, preventing our youth from ever picking up a cigarette or tobacco product of any kind is imperative to protecting these future generations from the harms of such an addiction.” 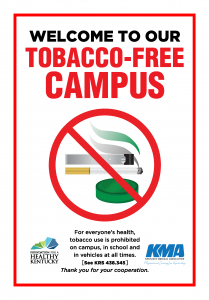 Through the Tobacco-Free for Students program, eligible school districts can order metal signs for school entrances and outdoor sports venue fencing, as well as window decals for exterior school building doors and buses. Initially, the signage will be distributed on a first-come, first-served basis to districts that adopt a new tobacco-free schools policy after April 2019, in compliance with the new law (House Bill 11, KRS 438.345). In January 2020, eligibility for the free signage will be expanded to include Kentucky school districts that previously had passed tobacco-free schools policies and would like to refresh their campus and vehicle signage. The program will continue until July 1, 2020, the deadline for schools to adopt the new policy, or until signage runs out.

“We expect to have enough signage to meet the needs of every school district that has recently made the decision to go tobacco-free,” said Shawn Jones, M.D., president of KFMC. “Our hope is that offering the signage first to the 58 percent of school districts that hadn’t previously gone tobacco-free will be an incentive to move quickly for budget-conscious school boards that want to protect student health but are struggling with how to pay for the mandated signage.”

House Bill 11 was one of KMA’s top priorities during the 2019 legislative session. Tobacco cessation has been a focus for the Association for a number of years, with smoking included as one of KMA’s AIM for Better Care initiative target areas and KMA and the KFMC’s Commit to Quit public health campaign.

Media events with KMA physicians will be staged across the state throughout the fall as school districts install and unveil their signage. KMA members are also encouraged to show their support for the campaign by using the hashtag #TobaccoFree4Students on social media, and by tagging their local school districts.

More information on the Tobacco-Free for Students campaign is available at https://www.tobaccofreestudents.org/.