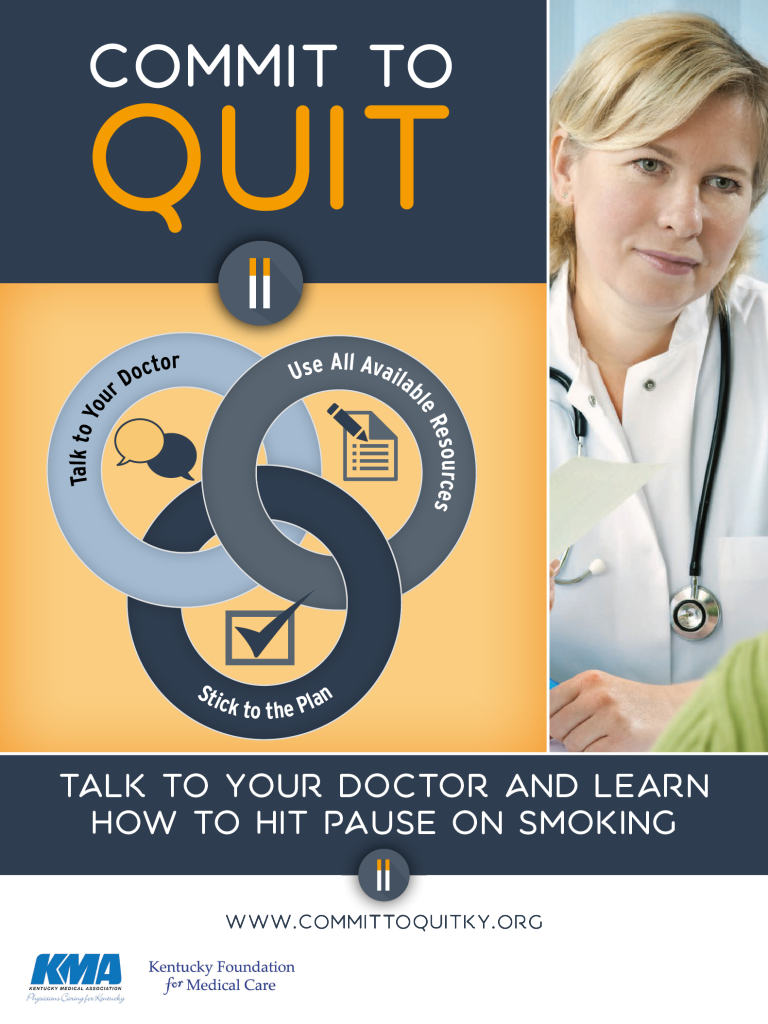 Physicians know patients are much healthier when they quit smoking. Smokers know that too. The Commit to Quit campaign, sponsored by the Kentucky Foundation for Medical Care and KMA with other partners, is aimed at ensuring smokers know the benefits of working with their physicians to kick the habit.

Outreach efforts continue to grow. In addition to advertising, posters and articles, the Commit to Quit campaign will soon include a video stressing the benefits of quitting smoking that physicians can download and televise in their offices.

The campaign stresses the value in smokers partnering with their physicians to find the best method for them, whether it’s counseling, nicotine patches or medication.

Monalisa Tailor, MD, an internal medicine physician at the University of Louisville, said she sees herself as an “accountability partner” for patients trying to quit smoking. She recognizes smoking is a habit and a coping mechanism. Dr. Tailor is one of the physicians featured in the Commit to Quit video.

Shawn Jones, MD, an otolaryngologist from Paducah, is vice chair of the Kentucky Foundation for Medical Care, a past president of KMA and an outspoken advocate for smoking cessation. He said in the upcoming video that one of the biggest hurdles to a smoker’s efforts to quit is a willingness to try and a willingness to continue when early efforts fail.

That’s why it’s important for physicians to be involved. Studies show physicians can play an important role in helping patients reach their goals and quit smoking. A 2013 review of trials involving physicians working with patients to quit smoking found their intervention led to a significant increase in the quit rate. A 2007 report from the Association of American Medical Colleges found that physician interventions can increase long-term abstinence rates to 30 percent versus a 7 percent success rate among smokers who attempt to quit on their own.

When patients quit, they are healthier. Those who quit smoking see nearly immediate benefits. After quitting, smokers can cut their risk of lung cancer by 30 to 50 percent after 10 years. They can cut the risk of cancer of the mouth or esophagus by half within five years after quitting. Smokers reduce their risk for heart disease and stroke within one to two years of quitting, and also see a reduction in the respiratory symptoms associated with smoking, according to the CDC.

Studies show that up to seven in 10 smokers want to quit.

The Commit to Quit campaign aims to guide them to success. As Dr. Jones stresses in the upcoming video: “Kentucky physicians stand ready to help you commit to quit.”