Under HIPAA a “code set” is any set of codes used for converting data elements, such as Current Procedural Terminology (CPT), Healthcare Common Procedure Coding System (HCPCS) and International Disease Classification 10th edition (ICD-10). Modifiers are an important part of CPT as they provide the means to indicate that a service or procedure performed has been altered by some specific circumstance but has not changed in its definition or code.

Currently, when a physician treats a patient for hypertension and osteoarthritis, and the patient also complains of a problematic skin lesion that is removed at that same encounter, the evaluation and management (E/M) services are considered separate and significant and the physician is paid for both the E/M service and minor surgery at 100%.

In October, Anthem announced beginning with claims processed on or after January 1, 2018, E/M services that are eligible for separate reimbursement (denoted by the use of modifier – 25)  when reported by the same provider on the same day as a minor surgery  will be reduced by 50%.

The rationale used by Anthem is one component of the National Correct Coding Initiative that indicates surgical procedures (and some non-surgical procedures) include both pre-and-post work by the physician that is integral to that service, and for those procedures a separate E/M service may not be reimbursed.

Anthem is ignoring the second component of correct coding, and that is to recognize when the physician work goes significantly beyond work normally associated with a minor surgical procedure on the same day. In that instance, an E/M may be considered a separate service and full reimbursement is warranted for both the surgical procedure and the E/M in accordance with the National Correct Coding Initiative.

Anthem policy further deviates from administrative simplification, CPT standards and KMA policy:  “KMA endorses AMA-CPT as the standard accepted coding system in Kentucky and (notes that) proper use of CPT by insurance carriers requires adherence to all of its rules and guidelines.”

Examples of Proper Use of the 25 Modifier

A patient has a nosebleed. The physician performs packing of the nose in the office, which stops the bleeding. At the same visit, the physician then evaluates the patient for moderate hypertension that was not well controlled and adjusts the antihypertensive medications.

The 25 modifier may be reported with the appropriate level of E/M code in addition to the cystourethroscopy. The physician had to evaluate the patient based on the symptoms and decides on the procedure to be performed. The procedure was then performed on the same day as the E/M.

Although Anthem has said that they “do not expect physicians to modify their approach to delivering services” this policy change has the potential to significantly disrupt care well beyond patient inconvenience. It is more important than ever that physicians continue to strive for correct coding by following CPT guidelines, NCCI rules and properly document the procedure and documentation of the significant, separately identifiable E/M service clearly as a distinct service in the medical record.

Below are some resources that provide guidance on correct coding and documentation. 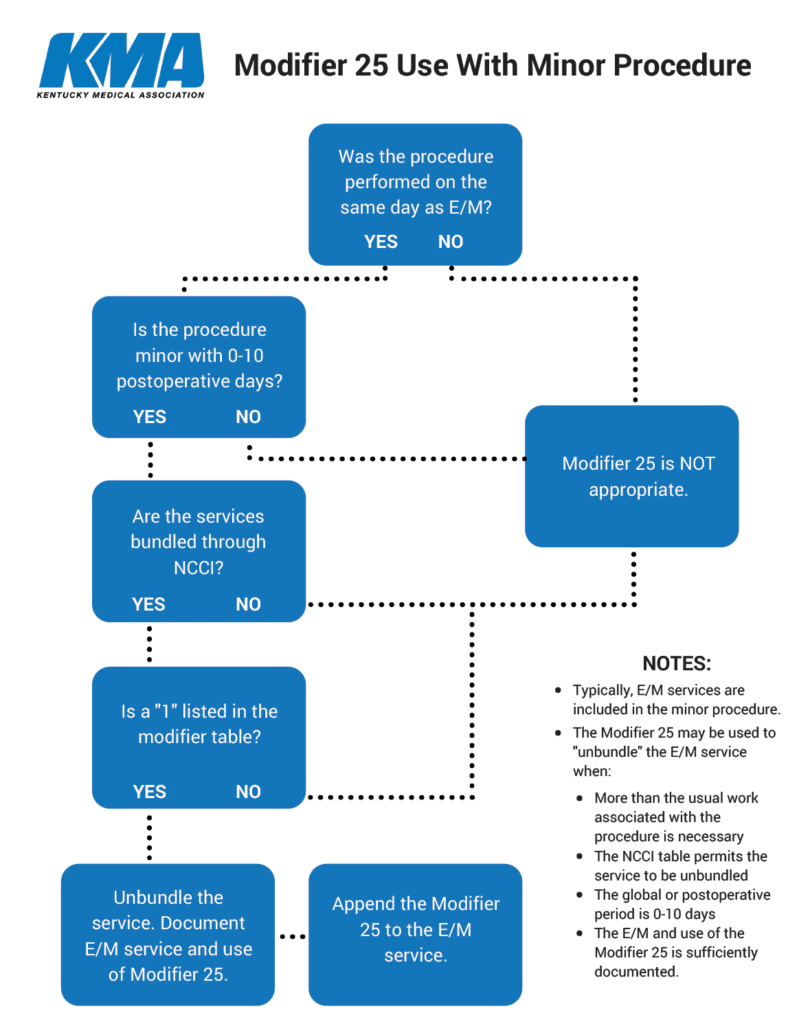