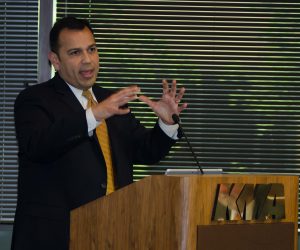 While Sen. Alvarado sponsored many of those bills – including two successful KMA-priority bills, Senate Bill 17, which ensures physicians’ licenses are not contingent upon initial board certification or recertification, and SB 18, which requires insurers to follow a new set of policies before changing an existing agreement with a provider – he passed some of the credit along to physicians and KMA.

“The perception is we’ve been a disengaged group in the past,” Sen. Alvarado said. Other legislators, he said, “noticed we’ve been more engaged.”

KMA members testified on a number of bills before the legislature, adding their expertise to the conversation.  That helped with passage of those two KMA-priority bills and other bills that affect health care.

Beyond that, the physician engagement in the 2016 legislative session inspired him. “That gives me energy to see everybody get fired up,” he said.

Legislators, Sen. Alvarado said, like groups to be proactive and the Kentucky Medical Association and its members were proactive in addressing the Maintenance of Certification issue. That legislation prohibits the Kentucky Board of Medical Licensure (KBML) from requiring board certification or licensure; Kentucky is one of only two states to take such action.

“To be on the offense is more fun than being on defense,” Sen. Alvarado said. “We’ve been on defense a long time.”

Many of the bills that come before the legislature each year are related to health care, and KMA has been active advocating for the physicians’ position on those bills. For instance, KMA physician members testified with regard to two other important pieces of legislation – SB 19, which stipulates that appointees to the KBML come from appointees submitted by KMA, and SB 20, which establishes an appeals process for denied Medicaid claims within the Cabinet for Health and Family Services. Both bills passed in the House and Senate and were signed by Gov. Matt Bevin.

While the legislative session has ended, Sen. Alvarado said more changes in health care are in the pipeline. Gov. Bevin, he said, has planned changes for the state Medicaid expansion and physician involvement in those discussions will be important.

“You’ve got to be vocal,” he told physicians. “They want to hear from the doctors.”

Sen. Alvarado is one of two physicians in the Kentucky General Assembly; Rep. David Watkins, D-Henderson, MD, is the other. Sen. Alvarado said there’s room for more.

“We need more doctors involved. We’re problem-solvers,” he said. “You bring the way you problem-solve with your patients into this job (in the legislature).”