Success of Medical Review Panels Will Depend on Physician Involvement 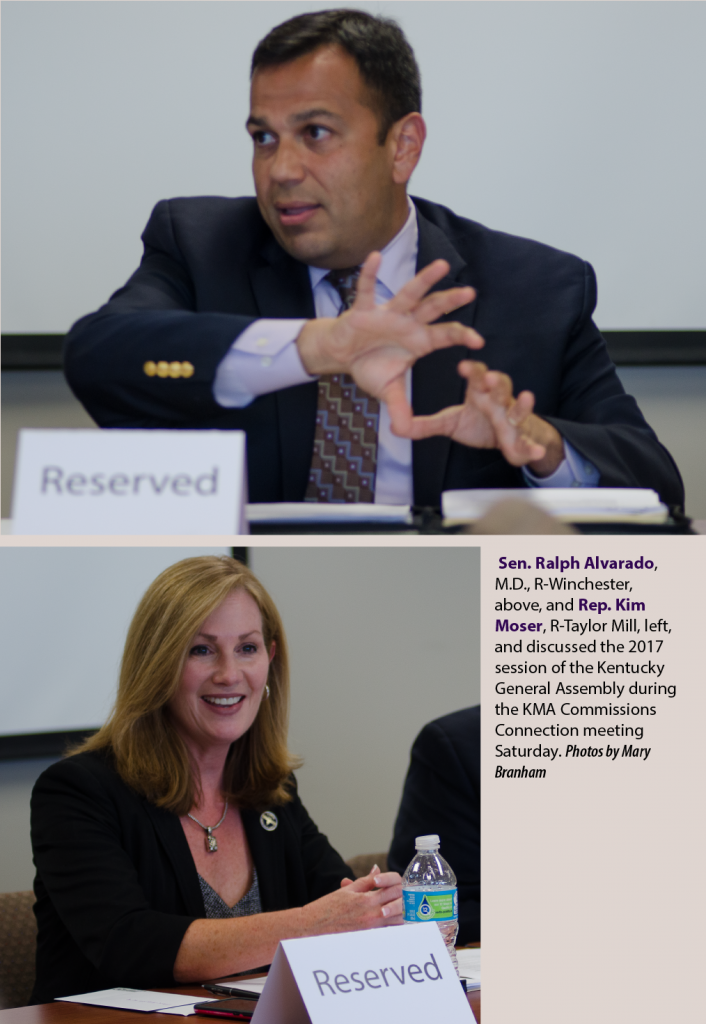 Sen. Ralph Alvarado, M.D., has one message for physicians regarding the passage of legislation earlier this year that established the Medical Review Panel process in Kentucky: Be ready to serve if called upon.

“If you’re licensed in the state of Kentucky, you are in that pool” of potential panelists, Alvarado, R-Winchester, told attendees of the 2017 KMA Commissions Connection Saturday. Three physicians will be empaneled to review each malpractice case filed in Kentucky to determine the merits of the case before it can proceed to circuit court. Plaintiffs and defendants each pick a physician and then jointly choose a third, Alvarado said.

While regulations are still in the works, the medical review panelists will be selected from physicians who would have expertise in a potential case based on lists from the Kentucky Board of Medical Licensure. “This is going to succeed or fail based largely upon the participation of physicians,” said Cory Meadows, KMA Director of Advocacy and Legal Affairs. A successful implementation of Medical Review Panels, he said, will help guide future tort reform efforts.

“Doctors can say they don’t have time, but this is an opportunity for us to get the legal climate in the state correct,” Alvarado said.

Senate Bill 4, which established the Medical Review Panel Process, and other legislation passed in the 2017 session of the Kentucky General Assembly, take effect June 29.

Alvarado said this is simply a first step in tort reform efforts in Kentucky. “We need to catch up with the rest of the country,” he said, to create a more equitable, fair civil justice system.

Rep. Kim Moser, R-Taylor Mill, joined Alvarado for the discussion of the 2017 legislative session at Saturday’s meeting. She was the sponsor of House Bill 333, which strives to address the problem of opioid addiction in Kentucky. The new law makes it a felony to illegally sell or distribute any amount of fentanyl, carfentanil and related drugs tied to an increase in drug overdoses in Kentucky. The law includes a provision to limit prescriptions for Schedule II controlled substance to three days, with several broad exceptions.

Changes were made to the Kentucky All-Schedule Prescription Electronic Reporting, or KASPER, the state’s prescription monitoring program. For instance, Senate Bill 32 requires the Administrative Office of the Courts to forward drug conviction data to the Cabinet for Health and Family Services for inclusion in KASPER. House Bill 314 requires certain hospitals to report positive toxicology screens to the cabinet for inclusion in the KASPER reports.

“You can understand what patients have in their system,” Moser said. “That was another good thing that happened with KASPER. The Cabinet is interested in making KASPER more user friendly.”

The legislators reviewed the successes for health care-related legislation in the 2017 session, including the passage of Senate Bill 89, which ensures smokers who want to quit have access to the treatments and counseling recommended by their physicians. And, while Senate Bill 78—which would create smokefree school campuses—didn’t pass, Alvarado believes “public opinion is on our side. Seventy percent want to see smokefree Kentucky for workplaces and schools.”

The legislation passed the Senate, but stalled in the House.

Kentucky is still awaiting federal action on the state’s Medicaid waiver request, which is based on the Healthy Indiana Plan, or HIP. Alvarado said several states are looking to Kentucky’s waiver, meaning the Commonwealth could become a national model.