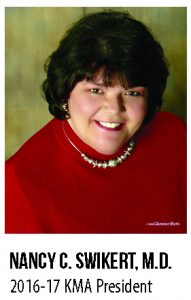 As most of you know, the Trump administration is trying to repeal and replace the Affordable Care Act as one of its major running goals. Recently, several substitute proposals were brought forward and discussed with an attempted vote in early April on the American Health Care Act (the House Republican proposal), which was pulled from the vote at the last minute. Now, the administration has moved on to other priorities and will revisit the health care goals again in the near future.

Several major medical organizations opposed the AHCA. At the present time, organized medicine believes there is no good viable, sustainable health care proposal to repeal and replace the ACA, but the ACA is generating big funding issues both in the states and on the federal level. Before the proposal was pulled, in an attempt to be even leaner, the AHCA was willing to cut some things like ER coverage, laboratory, physical therapy and wellness visits.

These proposed cuts further inflamed several organizations that are big proponents of preventive care and urgent care. We are between a rock and a hard place, so to speak. Organized medicine didn’t want to jump from plan to plan without having some of the problem areas addressed.

So let’s take a look at the major points in the ACA that would relate to health care. If you have an idea of what we now have, you will be better prepared to understand where we want to go. To achieve any major changes, the proposal will need to be bipartisan. Right now, each party is trying to develop proposals based solely on their own party’s historical likes and dislikes. To move forward to solving the health care problems, I believe we will need compromises on both sides. It has been said that to get a doable compromise, neither side will be happy totally with the product, both sides having to give some points up to get the compromise.

All the current proposals have pros and cons. Depending on what you are targeting, you will like one proposal over another. So, first, let’s dissect the ACA. The ACA sets goals and establishes how those goals will be measured for success.

The Goal of ACA: Two thrusts drive the ACA

The Success of ACA: Adequate access to health care

Now, we need to understand the explanation of these. Let’s look at Goal #1 in this article and next month we will dissect Goal #2 with the success measurements associated with it.

It has now been five years since the ACA was implemented. Estimates of the number of Americans who gained coverage because of the ACA range from 7 million to 16.4 million.  Beefing up the health insurance marketplace with funding from the federal government is the mechanism used to achieve this increase.

In my article next month, we will further look at the ACA by looking at the proposals to achieve the goals and success of the #2 goal of the ACA.

Again, follow along at the website developed by the AMA for education of patients and members: www.patientsbeforepolitics.org. Things can change quickly.