John White, M.D., and Bruce Burton, M.D., know there’s strength in numbers. As the highest contributor and fundraiser, respectively, to the Kentucky Physicians Political Action Committee (KPPAC) last year, both physicians are adamant in their support to make physicians’ voices heard in the election of pro-medicine candidates for the Kentucky General Assembly.

KPPAC last year set a goal to become a $100,000 PAC. To achieve this, PAC leaders initiated the KPPAC 100 program in 2016 to promote physician leadership and allow KMA members to amplify their voice in the election process. Recognition as a KPPAC contributor begins at $1,000 donations.

Giving to KPPAC “means physicians can band together and essentially leverage their influence better than you can individually,” Dr. White said.

“As physicians, we need to be involved in KPPAC or we stand to lose out,” Dr. Burton added.

Robert Couch, M.D., chair of the KPPAC Board of Directors, stresses that point in explaining the KPPAC 100 initiative. 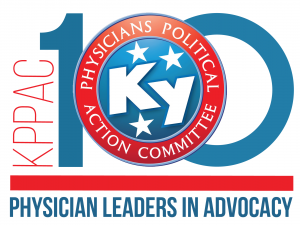 “Donations to KPPAC 100 assist in electing pro-medicine candidates and, as a result, have a greater impact on the practice of medicine,” he said. “Also, being a $100,000 PAC sets KPPAC apart from the multitude of other PACs and allows it to be more competitive.”

To accomplish this goal, much work needs to be done. Dr. Burton pointed out that, “as a PAC, physicians generally don’t contribute nearly as much as many other professional organizations.” In fact, less than 5 percent of KMA members contribute to KPPAC.

“Some people don’t view it specifically as their problem–somebody else will take care of it,” White said.  “That just doesn’t happen. I was once told, ‘You may not be interested in politics, but politics are interested in you. Things are going to happen if you don’t have some influence on them.’ ”

“If we could get more people involved, we could achieve even more results,” White said. “I think we’ve shown some positive results certainly in this past legislative session and I hope we can continue that.”

He could not be more accurate. During the 2016 election cycle, KPPAC had a 96 percent success rate with the candidates it supported. Those same pro-medicine candidates went on to sponsor and pass legislation that is critically important to physicians and patients.

“There’s a lot of legislation that will impact the way we practice—tort reform, medical review panels, scope of practice issues and practice guidelines, etc.,” Dr. Burton said. “If we aren’t involved with our legislators, they aren’t aware of our interests and don’t have the background to sometimes make the best decisions for physicians and our patients.”

Dr. White has been involved in advocacy efforts since he was in medical school. “It’s something I enjoy,” he said. “I think it’s important work for our patients and our profession. It’s how you can generate more influence just than in your daily practice.”

In addition to giving to KPPAC, Dr. Burton said, physicians can participate in advocacy by voting for pro-medicine candidates and developing relationships with their legislators. “They can also run for office, like Dr. Ralph Alvarado,” he said.

Even though an increasing number of physicians are employed physicians, this shouldn’t preclude them from supporting KPPAC, Burton noted. “It’s just as important for them to participate as those who are still independent practitioners,” he said.