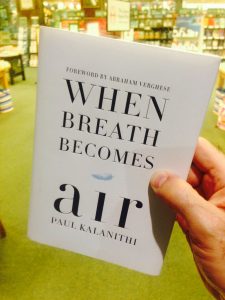 When Breath Becomes Air…becomes me.

I knew I would love this book.

When I learned that a young doctor had written about his journey to the end of his life, I thought I would probably find his words meaningful. Individuals who are keenly aware of their mortality and are willing to talk about it, usually can find something important to say.

What I didn’t expect was how much this important book, When Breath Becomes Air, would become me.

Dr. Paul Kalanithi died on March 9, 2015, only weeks after completing his Neurosurgery residency at Stanford. Tragically, he had been diagnosed with lung cancer 22 months earlier as he was entering his final year of residency. But rather than curl up in a corner, he cried, grieved, embraced his wife Lucy, and lived every remaining moment on his own terms.

Even if I’m dying, until I actually die, I am still living.

Through multiple rounds of chemotherapy, physical therapy, endless tests, and unrelenting pain, Paul (I call him “Paul” because I feel like I really know him) cared for patients, loved his family, had a baby, and wrote a book.

When Breath Becomes Air has five distinct parts: Foreword, Prologue, Part I, Part II and Epilogue. Each part could stand alone as fantastic literature, but when taken together the whole becomes transcendent.

The foreword was written by Dr. Abraham Verghese, Paul’s Stanford colleague who, like the reader, really didn’t know Paul very well until after his death. Dr. Verghese eloquently sets the stage for the reader’s journey and perfectly ends his foreword with: Let me not stand between you and Paul.

Paul’s writing begins with the prologue, where we witness this young man’s life being completely broadsided by his cancer diagnosis. But it’s not just Paul’s story that draws you in, it’s how he tells his story, the images his words create.

Now I lay there, wide awake. A young nurse, one I hadn’t met, poked her head in.
“The doctor will be in soon.”
And with that, the future I had imagined, the one just about to be realized, the culmination of decades of striving, evaporated.

The reader cannot help but feel sorry for Paul’s plight. But we are just beginning to know him. After the prologue, Part I is Paul’s account of growing up in the remote town of Kingman, Nevada. His father was a cardiologist, his mother a tireless advocate for Paul and the other young would-be scholars in that desert town.

And while I was highly interested in Paul’s story, it’s his account of medical school -especially his cadaver lab- that made me feel like I had found a kinsman. I can’t imagine any doctor reading Part I and not coming away with the same feeling of connectedness.

And it just gets better and better, as we are there with Paul through the ups and downs of medical school and residency. Being a doctor, with all the responsibility and pressure, can be lonely. Paul’s writing not only made me feel connected to him, but to all doctors as well. All doctors go through many of the same crises, deal with the same emotions, and struggle with the same problems that Paul describes in Part I.

Then, after Part I left me feeling like Paul and I were family, along comes Part II and a kick to the gut. In language that is pure poetry, Paul recounts the series of events encompassing his head-on struggle with cancer and tries to put them into context. Near the end of Part II his language is noticeably more thick with meaning and metaphor. He was clearly more ill and suffering when he authored his final pages. Parts I and II are Paul’s voice, and when Part II ends we fear the worst and feel the loss.

The epilogue comes next, authored by Paul’s wife Lucy, also a nascent physician. Her job is to tell us the details of how Paul died and how she and their daughter, Cady -to whom the book is dedicated- are getting along. We need to know, because after all, by this time the reader feels like one of their family, needing closure, needing consoling, needing comfort.

I knew I would love this book, but I didn’t know that I would feel so close to Paul, Lucy, and Cady. It might be because Paul died just over a year ago. The emotions are still at the surface. Lucy and Cady still live in the San Francisco area. They are real people (I know because Lucy “favorited” one of my Twitter posts about the book). This is not fiction.

It also might be due to the shared experiences that Paul and I (and every other doctor) have in common.

But I’m certain that a major reason I love this book is that it is so well written.  Dr. Verghese’s foreword aptly declared: The prose was unforgettable. Out of his pen he was spinning gold.

I agree. There are many passages in Paul’s book that could stand on their own and glisten with poignancy. Did I mention that I love this book? I could offer numerous examples of how wonderfully When Breath Becomes Air is written, but being a physician I think I’ll end my review with Paul’s take on the physician’s duty:

The physician’s duty is not to stave off death or return patients to their old lives, but to take into our arms a patient and family whose lives have disintegrated and work until they can stand back up and face, and make sense of, their own existence.

When Breath Becomes Air should be required reading for any premed or medical student, resident, attending physician, retired doctor, patient, future patient, or mortal human being. It’s that good.

Thank you Paul and Lucy. Because of When Breath Becomes Air, this beautiful literary gift, we can all come a bit closer to making sense of our own existence. 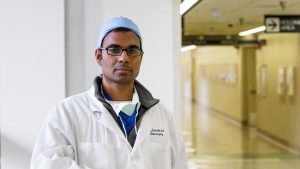 Paul Kalanithi, M.D., was a neurosurgeon and writer. Paul grew up in Kingman, Arizona, before attending Stanford University, from which he graduated in 2000 with a B.A. and M.A. in English Literature and a B.A. in Human Biology. He earned an M.Phil in History and Philosophy of Science and Medicine from the University of Cambridge before attending medical school. In 2007, Paul graduated cum laude from the Yale School of Medicine, winning the Lewis H. Nahum Prize for outstanding research and membership in the Alpha Omega Alpha medical honor society. He returned to Stanford for residency training in Neurological Surgery and a postdoctoral fellowship in neuroscience, during which he authored over twenty scientific publications and received the American Academy of Neurological Surgery’s highest award for research.