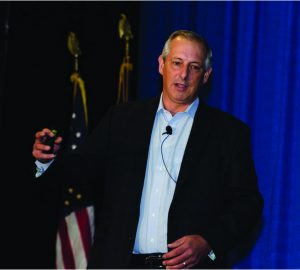 Tony Buettner, project manager with Blue Zones, an organization that helps people live longer, better lives, made an immediate impact on physicians when he revealed practical ways to transform the health of communities and the cultural traits of the longest-lived and healthiest places in the world.

“I noticed at the lunch line the people were going more for the salad and the vegetables, leaving the lasagna,” said Michael Kuduk, M.D., of Winchester. “That’s good. That’s the way to change people’s behavior.”

Eating more healthful foods is just one secret Buettner shared with nearly 100 physicians who attended the Kentucky Physicians Leadership Academy at the KMA Annual Meeting Sept. 10. People in those “Blue Zones” communities are living to around 90, he said.

“On average, people in America are living to age 78—leaving 12 good years on the table,” Buettner noted. “We’ve identified evidence-based ways for people to take these good years back.”

Buettner cited the Danish Twin study that shows longevity is tied to our genes by only 20 percent. He said 80 percent is determined by our environment and lifestyles.

Longevity hotspots, he said, can be found in Okinawa, Japan, Sardinia, Italy, Nicoya, Costa Rica, Icaria, Greece, and among the Seventh-day Adventists in Loma Linda, Calif.

The name “Blue Zone” came from the blue circles demographers Gianni Pes and Michel Poulain drew on a map to indicate the cluster of villages in Sardinia’s Nuoro province with the highest longevity.

Some of the commonalities that helped people live longer, better lives were exercise, diet, social and spiritual connections, and having strategies to reduce stress, Buettner said.

He found that people in these areas don’t necessarily belong to a gym or run marathons. “They move naturally—on average every 20 minutes,” Buettner said.

People in these areas also are eating plant based food and drinking red wine. Meal portion was also important. Buettner noted, “Today’s average dinner plate is 13 inches. Our parent’s dinner plate was only 10.”

“Chop up fruits and vegetables and put them on the top shelf where they can be easily seen and accessed,” he suggested.

People in these Blue Zones also keep parents and loved ones close and make them a priority.  They also seek out healthy friendships.

Cynthia Rigby, M.D., of Louisville, has been personally impacted by this research.

“I lived in a subdivision with no sidewalks,” she said. “The houses were very far apart.  I hardly knew my neighbors and we were working almost all the time.”

After reading about Blue Zones, she decided to make healthy lifestyle changes. “Now I live in Norton Commons. We have sidewalks. We know our neighbors. We don’t use the car.”

When asked how these changes have affected her, she said, “I think I got my sanity back.”

Buettner concluded his presentation by saying, “There’s no silver bullet. But what Blue Zones does is unleashes silver buckshot.”