Teamwork may be a Key to Physician Satisfaction 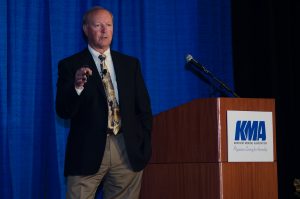 Teamwork. The concept is simple enough, but many physicians find it difficult to accomplish based on a longstanding standards of medical practice.

The practice of clinical medicine has changed, Bagley said. “How many would say, ‘this is not what I signed up for?’”

With changes like electronic health records increasing administrative tasks and time spent working, physicians often have little time to rejuvenate and spend time with family. But Bagley said things like that—and MACRA, insurance plans and other things people “are doing to us”—only account for a small amount of the burnout factors.

“Only about 20 percent of why you feel hammered at the end of the day has to do with those things,” he said. “Eighty percent is about operational inefficiencies.

“Most of the stuff that’s making your life miserable is not doctor work,” he said. “A strategic redistribution of the work is the answer.”

That will mean identifying standard work, like working with patients to get a flu shot, shouldn’t fall in the physician’s realm of work. Technology can help, Bagley said, but many people aren’t using it.

“Could we use text messaging to remind people of things they should do or checking in with them about how they’re doing this week as compared to last week?” he said.

Doctors shift away from emailing patients because they don’t want the volume of emails that might clog their inbox. But Bagley said a staff member could handle emails the way they do calls. With calls, he said, somebody gets the information and triages it. With email, staff members don’t have to do the keyboarding—the patient has already done it.

Donald Wilson, M.D., F.A.C.O.G., an OB/GYN who serves as medical director at PrimaryPlus in Maysville, liked what he heard about teamwork from Bagley.

“I’ve been trying to get a team-based approach in our system for several years now,” Wilson, the KMA 9th District Trustee, said. “I think I have a lit bit more ammunition to hopefully help them see the light that will help them get home earlier and have less computer homework.”

Physicians can learn more about the STEPS Forward program at www.stepsforward.org.